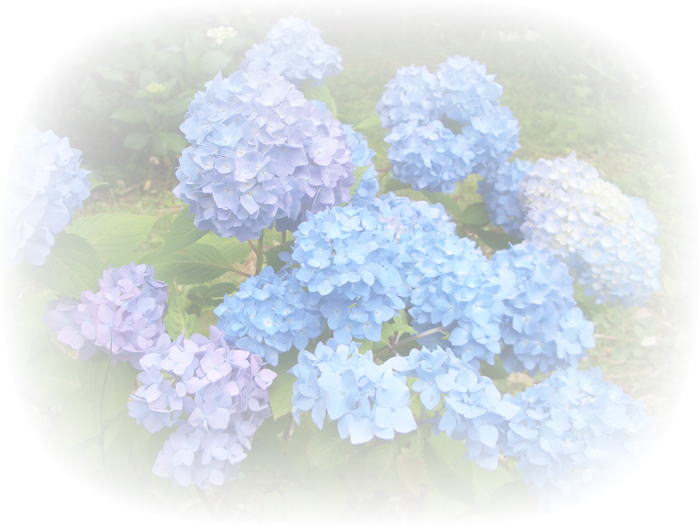 Wakasano Tenman-jinja is the Shinto shrine to be affectionately known as " Hydrangea Shrine " and to enshrine two deities( kami ) of Sugawara-no-Michizane ( the deity of literary and martial arts ) and AmenoOshihoMimi-no-mikoto ( the son of Amaterasu-Ohmikami, the supreme Shinto deity the sun goddess) .

By the divine spirit power of Mayoke／Yakuyoke which the hydrangea flowers bloom at this shrine have, it is also known as " Mayoke Tenjin ( Mayoke Shrine ) ".   ―  Mayoke means talisman／charm／protection against evils and devils, or keeping out of harm's way.  ―  Yakuyoke means avoiding／expelling／purifying diseases, disasters and other evils in unlucky year which is believed that people are likely to be unlucky and must be careful during the year in their life.  This thought is based on the theory of the positive
and negative.

It is unknown on the foundation date but it is found that it was established by transferring a divided tutelary deity from Kitano Tenman-gu ( shrine in Kyoto ) to this location and enshrining the deity of AmenoOshihoMimi-no-mikoto together beside it in the ancient times and that predecessor of present shrine existed about 680 years ago ( Japanese
era Ryakuo 4 ; 1341 ).  The main shrine building was reconstructed in Keio 4 ( 1867 ),
and it was listed as a village shrine ( old shrine ranking ) in Meiji 12 ( 1879 ).


There are more miraculous virtue than from ancient times, as Ubusuna-gami ( the guardian deity of one's birthplace／tutelary deity of the locality ) at the entire region of Yano-no-sho as a manor in medieval japan ( the 18 villages ), the veneration of the Akamatsu clan and other neighborhood feudal lord is ardent, and deeply revered and worshiped by the people at large, it is evident that this shrine occupies an important position at least after the medieval ages.

In the Ema-do hall ( shrine building where votive picture tablets are hanged ) in front of the hall of worship, there are a lot of old votive picture tablets important for cultural assets such as the AkohRoshi ( lordless Samurai warriors of Akoh domain ; 47 loyal retainers ) and the Empress Jingu on horseback.  The Torii ( Shinto sacred arch／gate ) located in this precincts was dedicated to this shrine in Kyoho 17 ( 1732 ).  ―  Originally it was located in the slope of the front approach to this shrine.

Colorful hydrangeas such as blue, purple, red, white and so on bloom every year at this precincts and the forest around.  Being attracted to the atmospheric presence or elegance of the hydrangea which blooms at the shrine in the middle of the forest with serenity and tranquility, worshippers come also from afar.  Many worshippers visit to this shrine through all seasons for the sake of " Mayoke-mairi " to face and true to oneself silently, and to purify or drive off evil mind and impurities.   ―  Mayoke-mairi  means visiting this shrine to pray for the Mayoke.